Movie Review: A great film for teens The Prankster

A Prankster Entertainment Production Of a Tony Vidal Movie

The Prankster. The very name of this movie endeared me to it, beaconing me to watch it, to know the Prankster, his motivation and his story. I’m not a fan of brainless jokes. I easily passed on Grown Ups this year because its trailers promised it would be line after line of silliness. But Prankster… 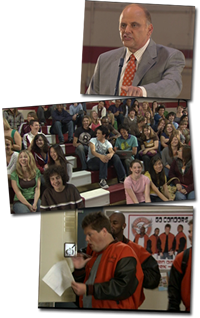 The Prankster’s blurb said: Chris Karas is the brilliant leader of The Pranksters, a secret society that rights the wrongs of high school by pulling sophisticated pranks on deserving oppressors. Who in the world couldn’t relate to that? Is there anyone who hasn’t wanted to be a Prankster? Whether Chris Karas and his band turned out to be like Don Quixote, Ken Kesey and the Merry Pranksters — or a whole other take on fighting the wrongs of high school society — it promised to be a good story. Promised, and didn’t disappoint. You might think with a name like The Prankster, the film might be an endless chain of silly pranks, of gags and slapstick. It’s not. Pranks are laced throughout the story, but this film really does have a story, and it’s a good one. Tres Rios High School, home of the Pranksters, is a school just like any other. So-called somebodies who are full of themselves, nobodies who are really somebody if only they’d believe it, posers who…, well, there are so many types of posers. Teachers/administrators with insight and those who are fools, family and friends who see you, and those who don’t. 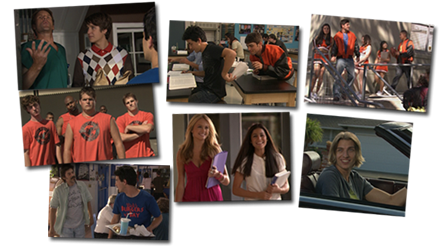 There’s Bradley the student body president who is Yale-bound to follow in his father’s footsteps. Dad is very proud of him. Of himself, that is. There’s Chris, straight-A student but of a Greek immigrant, working class family. Chris works for his uncle Nick’s Burgers by the Bay. His father, who runs a construction crew has the always-be-working old world mentality. There’s Chis’s best friend, who drives a nice car, has no responsibilities and refers to Chris as the working class hero. There are the jocks, who go through school playing their role of being the cool, the best, the idolized, the bullies. And there are the beautiful girls, rich and accustomed to getting things just because. 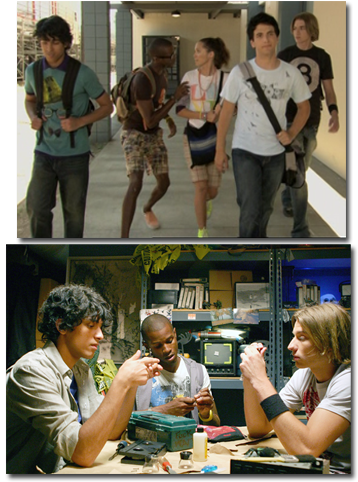 And within all this is the Prankster — or Pranksters.
Their mission:
“To awaken slumbering spirits
through random acts of chaos.”
“Being a prankster is not just about pulling jokes.”
“It’s a state of mind.”
“A way of life.”
“Any moron can pull a joke. The varsity lettermen do it all the time. Pantsing Freshman…”
“It [that joke] victimizes the innocent and what’s worse, lacks imagination. The whole point of being a prankster is to nail soon who really deserves it – and to do it with panache.”
Oh, “…and never suck up.”
As our story unfolds, we’re brought into the time of these teens’ lives where there comes the realization that high school is ending. That college beckons, or doesn’t.
That some things are not OK.
Is High School the peak of your career?
Is it the time you define yourself?
“We can’t be pranksters forever.”
“What else are we supposed to do?”
“I don’t know…”
Wait, that last paragraph alone makes the film seem so solemn.
It’s not.
Well, it is.
But it’s not.
This film is an excellent balance of fun and reflection, or laughs and love, of much of what life brings to each of us. 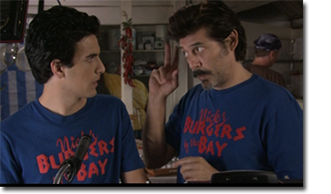 And then there’s Uncle Nick.
I love Uncle Nick.
He holds the wisdom of the Greek Scholars — and his own life experience.
I wish I had an Uncle Nick.
I’m glad Chris does, and so would all the people who get to know the fictitious Chris as he moved forward in life.
2010 brought us the movie theater big-money releases, some of them good. 2010 also brought us this quiet film that is (so far) available to be viewed online and sold online, rather than theaters — and it’s one definately worth viewing. See it via iTunes or Netflix, select from Netflix, or find it elsewhere. You’ll enjoy it and you’ll relate to the characters.

There is one thing this reviewer finds beyond belief though, and had I been part of the film’s creation this would never have happened:
There’s a classroom with an old beige tower and a beautiful white-framed iMac— and the school paper is being laid out on the tower!
Really? Well, every film has a flaw somewhere.
See it anyway and just be ready to cringe if you’re a Mac user.

Tres Rios High School is actually San Rafael High in Northern California. The school’s Principal even has a cameo role. The high-tech equipment used for the pranks is actual school equipment.

To See The Prankster

You can learn how to rent it or purchase it by visiting the film’s official website, ThePranksterMovie.com.