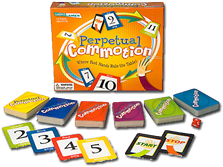 If you’re thinking that every great card game that can be invented has been, but you don’t know about Perpetual Commotion, I have good news for you.

The game’s website calls it “fast, furious and FUN” — and that’s exactly right.
The game is a bit like solitaire but oh, so different.

How my family plays:
Each player uses his own colored deck. Everyone counts out 13 “Feeder” cards, placing them face down, then puts five cards beside that deck, face up. Put the rest down for now. Then the play begins — and the rush is on!
When the game begins, any player who has a Start card face up, puts it out in the center “Arena” between all players. If any player has a 2 of any color, he puts it on top The color of that stack is now defined. Anyone who has a 3 of that same color puts in on top, and so on through 12. Once a 12 is placed, someone gets to top it with a Stop card, then turn over the pile putting it out of play to await scoring.

When no face-up cards can be played, you grab the rest of your cards, called Playmaker cards, and turn them over by 3s (solitaire style), playing any 3rd card that’s a Start card or fits a stack. Once you run through those cards, you place the top card at the bottom and go 3 at a time again. You get to put that top/third card on a stack if appropriate. Not the cards beneath.
Any time you play one of your face-up five cards, leaving an open space, you turn over your top Feeder card and put it in that space so it can be played.

The game gets crazy when everyone is slapping down cards, trying to beat others or waiting for someone to play a card — especially when it comes to the Stop cards!

The first person to place all of his 13 cards, calls “Out.” Then all of the played cards are counted and scored against any negative points a player has because of his left-over 13.
(There’s a die but we don’t use it and I’ve never seen it so I can’t address it’s use.)

This great card game is rated for ages 8 & up, but our family 5 year old not only played (our version) well when we started this as a family game, but also noticed and reminded me whenever I don’t see a card to be played. (She is now 8 and still a wiz.) I also played with a 9-year-old speed wiz who is now 12 and still a speed demon player. And the game actually belonged to a 12-year-old, now 15, and still into it as a game with the other kids.Special thanks to the makers for providing two replacement cards for when a card gets lost or damaged beyond use.

Perpetual Commotion® is the first game from New Hampshire-based Goldbrick Games, a family-owned company i am thrilled to have discovered. It took me long enough! The game was released in 2004! They also have a game called Debate This!®.